Australia is the main producer of precious opal. Precious opal occurs in very few locations around the world because its formation would have required a series of geological, climatic and possibly biological phenomena to coincide. This phenomena occurred in an area which today is the arid desert region that spans across Australia. Approximately, 100 million years ago the same desert was an inland sea called the Eromanga Sea. This sea was teaming with marine life and laden with fine sand rich in silica. The receding of this sea marked the end of the Cretaceous period and formed the Great Artesian Basin. Deep weathering during the mid-tertiary period, approximately, 30 million years ago, caused changes to the sediments releasing large quantities of soluble silica. This silica filled cracks and cavities in the ground and when it eventually solidified it formed common opal (opal without colour). In rare circumstances precious opal was formed (opal with colour).

Soluable silica also filled fossil cavities. Some of the opalised fossils discovered have been of wood, coral, bones and other skeletal pieces. Opalised fossils with brilliant colour provide for valuable specimens and are considered to be amongst the most beautiful prehistoric fossils. Evolving over millions of years these fossils have become a very important part of Australia’s palaeontological history and are sought after by collectors and museums around the world.

Solid Natural opal is opal which has not been treated or added to in any way by mankind, other than by the process of cutting and polishing.

The most valued of all opal is Black opal and is predominantly supplied by the opal fields of Lightning Ridge. Black opal is precious opal which when viewed face up displays a play of colour on black potch (common opal with no colour). Precious opal in Lightning Ridge is naturally formed on potch that ranges from black to grey. Crystal opal is also produced in Lightning Ridge and is translucent to transparent in appearance. The term crystal refers to the diaphaneity of the stone and not its structure. Precious crystal opal displays a play of colour within this translucent to transparent appearance. In addition to solid opal, a number of other varieties of composite opal are widely available. Composite stones are generally more affordable than solid stones as smaller amounts of precious opal are used.  In all cases, thin slices of opal are glued to a base material. It is common practice for the backing material to be natural common opal. Some examples of backing material are black potch or boulder opal (opal formed naturally within its surrounding host rock).

While most composite stones are made from natural opal, occasionally synthetic opal is used in doublets or triplets. 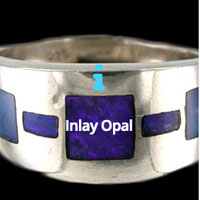